We had a party a few Saturdays ago. It was a fun and festive celebration with family and friends.

And then, Sunday morning, my introvert hangover kicked in.

This is really a THING. I love spending time with other people, but man – I just get exhausted,

I completed a full Myers-Briggs Type Indicator in 2005, and that’s about what I realized that I’m an introvert. Prior to then, I would get frustrated with myself. Why did everyone else like going out every night, clubbing, going to parties? Why did I always prefer movie nights to bar hopping?

When I took the Myers-Briggs test, I actually scored as a very introverted extrovert – right on the line. The kind of person who wanted to have a New Year’s Eve party, but wanted it to be small and possibly allow for a few minutes of quiet time to journal and reflect.

Discovering this about myself was freeing. I felt less guilty about wanting time alone and I allowed myself time to process rather than feeling forced to express myself immediately, which comes easier to extroverts, I think.

I also don’t want to limit myself, and I think I do that sometimes. I tell myself that I’m not the kind of person who can train large groups of people, or who can make friends easily. Those things aren’t true. I want to be self-aware – but I don’t ever want to let my self-awareness result in me subconsciously putting limits on who I can be.

But this introvert hangover was real. I spent my Sunday morning doing a lot of what I call puttering around. Is this a common term? Do people know what it is? It’s something I’ve said my whole life, but is it in the dictionary?

Okay, yes! It is in the dictionary. To putter means to “occupy oneself in a desultory but pleasant manner, doing a number of small tasks or not concentrating on anything particular.” And it’s one of my favorite things to do to decompress – just be at home, in my space, tidying and writing and making lists and doing lots of little things but not much of anything.

I need that decompressing after expending lots of energy entertaining others. How do others decompress?

This has been echoing in my head recently.

I was 29 when I realized how hard I was working to control everything around me.  And I learned to let go – a little.  But not all the way, and not always.

I was thinking about this recently when it comes to keeping a writing routine. I want to write regularly.  I need to.  But there are 24 hours in a day, and a little teddy bear I need to play with and snuggle with, and a wife to love on, and, you know, a day job (ugh) and housework (triple ugh).

At this moment in my life, I don’t know if it’s possible to keep myself on a regular routine with anything – reading, writing, running, socializing.

I think I just have to have faith in the universe that things always fall into place – and that my flow always comes back.

Because it always does.  That’s one of the secrets I’ve discovered.  If you relax and trust in the universe, everything falls into place.

Today, I was driving around for work, and trying to decide which fictional work I wanted to focus on next.  I was trying to decide on a story to expand so that I could enter it in an upcoming writing contest.

But I couldn’t decide.  And I can’t force it.  I have to stop trying and just allow.

Counting My Blessings: My teddy bear reaching out to snuggle me repeatedly tonight.  Bliss.

Whenever I’m not working or playing with Teddy and Tee, I’ve been stealing away moments to devour this book:

I’ve slowed down my blogging output recently, in part because I’m attempting to hone my craft.  A lot of the writing I do is just words vomited onto the blank page.  (Ew.)  This book is teaching me how to take my time, to meander and to allow readers to meander alongside me.  To be honest – I don’t usually think about The Reader.  Because, you know – who would be reading my stuff, anyway?

When I write, I think mostly of myself – what I want to get off my chest, what I need to put down on the page.  It would not hurt me to have a perspective shift.

I love this Joan Didion quote: The book talks about the concept of the contemplative essay.  You start with a thought – about life, about cooking, about a moth, about a shoe – and you see where it takes you.  You keep writing until you understand where you’re going and why.  This resonates strongly with how I think of writing – as my way of understanding and interpreting the world around me.

OH AND ALSO – the author, Dinty W. Moore, writes this: The rewards of publication are fleeting, while the rewards of regular writing practice are countless.

I am giving this whole “getting published” thing a try.  But if it doesn’t work out – that’s okay.  That part is not up to me.  My job is to keep my butt in my chair and just keep writing.

Counting My Blessings: I am grateful for new possibilities and the chance to learn new things. 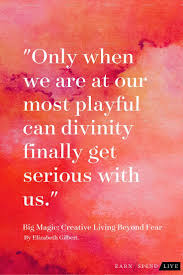 Recently I’ve rediscovered Elizabeth Gilbert’s podcast, Magic Lessons, with which she coaches budding creative souls and helps them to take steps toward their artistic goals.

It is lovely.  I listened to the first season when it dropped in 2015, but I’ve been lazy about exploring the second season, which came out last year.  Now, I am savoring it, and am about halfway through the season.  I’ve found many takeaways so far.

Takeaway # 1: None of this was wasted.

In the first episode of Season 2, Liz talks to a woman named Jo who aspires to be a comedy writer, but has spent years doing social work and getting her PhD.  Their conversation is really fun and entertaining, and I got a lot out of it.

Jo sounds like she is in her thirties or forties.  She’s established in a career, and now is realizing that she wants to be a comedy writer.  She is thinking to herself – as I often think to myself – did I do it all wrong?  Did I waste all this time?

Elizabeth Gilbert, in her gentle, inspiring way, says no.  She says that none of this was wasted.  And when I’m feeling clearheaded and optimistic, I agree.  Every step I’ve taken has brought me to the place I am now.  It was not a waste to become a therapist.  It was not a waste to work with the people I’ve worked with for the past six years.  It’s all part of who I am now, and what I have to offer.

Takeaway # 2: You have to do the work that makes you come alive. 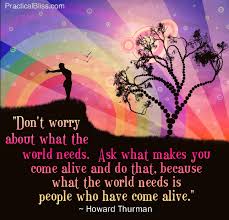 When people do the work that they are supposed to be doing, they are living in service to the world.

My job is pretty great.  I like it, and I’m good at it.  But lately – I don’t feel like it makes me come alive.  If I want to come alive, I have to do it someplace other than my day job these days.

Liz Gilbert talks about how the people who are most effective at their work are people who are doing what makes them come alive.  And I agree.  I am the MOST effective when I am in the flow – when I’m in a groove and feeling awesome.  There are skill sets, yes, and when I’m not feeling alive, I fall back on my skill set and I’m still a pretty great social worker.

But it takes effort.  And it’s never as powerful as when I have purpose, clarity of values, and flow.

Takeaway # 3: Life is a verb and people are always telling us to be nouns.

I loved this.  Liz had a conversation with a poet named Mark Nepo, and he talked about the things we say to kids.  “You like digging in the dirt.  You should be a gardener.”  “You’re good at singing.  You should be a singer.”  Life is about DOING THINGS – it’s all about verbs.  And yet, we try to assign nouns to people.

That’s what trips me up currently.  I feel really drawn to writing, but I’m not a full-time writer.  SO WHAT?  Writing is a verb.  Just do it.

I am not that into poetry.  I never have been.

If I tried really hard, I think I could come up with a few poems that I love.  Mary Oliver’s Why I Wake Up.  Wendell Berry’s The Peace Of Wild Things.

I wish I was more into poetry.  Because I know others who find such spirituality and beauty in poetry.  But for me?  Unless someone specifically references a poem, shows it to me, explains to me what it means on a personal level – it all goes way over my head.

This all came up recently because Liz Gilbert talks about a poem that I discovered I really like.  It’s called “A Brief For The Defense,” and it’s by Jack Gilbert.

It’s about (I think?) pursuing gladness in the midst of life’s ugliness and harsh realities.  Liz references it when trying to convince someone to pursue their art simply because it brings them joy and might bring others joy, too.

I’ll close with another Liz Gilbert quote, because I love every word she writes in her book Big Magic:

BREAKING NEWS: Oprah has a podcast!

Her first two episodes were interviews with Brené Brown, which was smart, because Brené Brown is AMAZING.

My biggest takeaway from their conversation was this Brené quote: People always say to me, “I want to go into the arena, but I’m scared. Can I take a little armor with me?” But one thing I have found in my life is that the only thing you need when you go in is clarity of values and faith. As in, “This is the article I wrote. And if you think I need to lose weight or that I suck, that’s okay. I’m standing on my faith and my values. You cannot knock me over.”

I often worry what others think of me.  I wish I didn’t.  It’s embarrassing to me, to admit this worry.

But according to Brené – if I am clear about who I am, what my values are, and why I’m doing what I’m doing – and if I have faith in a power greater than me (which I do, albeit in vague terms) – then haters can’t hate on me.  Or rather – they can hate all they want, but it won’t break me down.

I don’t know if I’m completely clear on what my values are.  There are words swimming around in my mind as I write…  Honesty.  Authenticity.  Growth.  Love.  Kindness. Mindfulness.  Presence.  Balance.  Play.  I’m always glad when something prompts me to consider my values.

Listening to the conversation between Oprah and Brené also prompted me to think about faith.  Brené says, “My faith is the organizing principle of my life.”  And I had a little faith moment, with these words jumping into my head – I have faith when I allow the universe to fill me with faith and spirit.   I do not have faith when I close up and try to do everything all by myself.

Counting My Blessings: I am grateful for a clean kitchen and an hour of writing practice.

Welcome to playful + peaceful! I’m a writer, a therapist, and a mom. I love to read books and drink coffee. I write about adoption, parenting, books + reading, and all the other things. I’m so glad you’re here!