One of Edgar’s books is titled Shark Versus Train: Who Will Win? He loves it. It’s a series of contests between a shark and a train, and it asks who will win in a variety of different scenarios – a diving contest (shark), a burping contest (train), playing basketball (train), or a hot air balloon ride (shark). At the end of the book, it turns out that the shark and the train are actually toys, being pitted against each other by two little boys. I’ll be honest – it’s not always clear to me WHY one would win over the other, and I guess that makes sense, since it’s two little kids applying the logic. But it’s a cute story anyway. 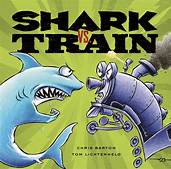 This book keeps coming to my mind when I consider a debate that keeps popping up for me: now versus someday. When it comes to the things that need to get done in my life, will they happen now or someday? Which will win?

My word of the year is NOW. My 2019 goal is to stop putting things off for “when the boys are older” or “when I feel better.” I want to be able to achieve my goals even with limited time, energy, and resources, especially my creative goals.

If you’ve been reading my blog regularly, or have seen the dark circles under my eyes, or have had a disjointed conversation with me recently – then you know that I am exhausted and short on sleep and energy. Tamara and I have gotten into a better routine with the boys and sleep, but better doesn’t really mean awesome.

So it’s hard to do anything NOW. NOW is a blissfully happy time that is not conducive to productivity.

I keep telling myself, Write now! If you can write now, you can write anytime! But the reality is, even if I do keep myself writing throughout this crazy time, I’ll still have to wait for Someday to devote the REAL kind of time I want to devote to my craft.

It’s an interesting thing to think about – now versus someday. It reminds me of another interesting debate – acceptance versus striving. Do I accept myself and my life as they are, or do I strive to reach what I want to have, to do, and to be? In the rooms of recovery, we are all about acceptance, and I do believe that happiness begins with acceptance. So much of my unhappiness in life has stemmed from desperately wanting things to be different when just accepting things as they were could have brought me peace.

But – we don’t want to stop striving, do we? It’s good to have ambition, to have a vision or a goal and to work toward it. I can accept the fact that I’m 36 and haven’t published my novel yet, but I can also strive toward the goal of publishing it eventually.

So maybe the answer to the acceptance versus striving debate is that it’s all about balance. A little acceptance, balanced with a little striving, makes a happy and fulfilling life. And perhaps it’s the exact same answer for the related debate, now versus someday. If I balance doing as many things NOW as I can, while also knowing that some big things (like hard core writing time) may have to wait until the summer, then I can feel good about what I get done each day while also knowing that more is possible.

So neither will win – now and someday will tie. And they’ll agree to be friends and co-exist (somewhat) happily in the toy box until the next time they’re taken out to play by a couple of imaginative pre-schoolers, just like in Edgar’s book. And we’ll all live happily ever after, accepting the now gratefully and striving for the someday with grace.